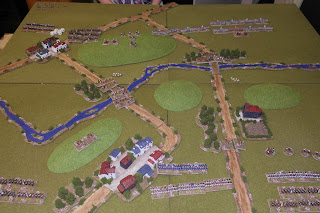 We finally got down to do a Spanish succession game, my French army against Austrians.  a simple scenario, one river with 2 crossings, the player holding both crossings at the end is the winner.  or so we thought. 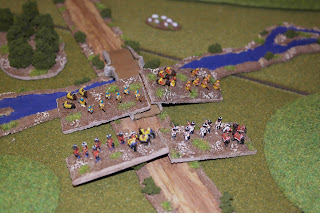 French dragoons quickly secured one bridge and held it for the rest of the game to the Austrian commanders surprise. (me - dam the dice sir!) 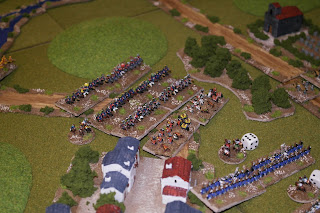 French cavalry crossing the secured bridge smashed into the Austrian dragoons routing them with ease, however the Baden regiments halted the advance and would become the best units of the day for sheer determination. 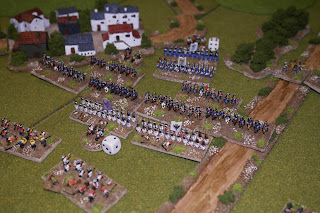 Austrian infantry try to stop the advancing cavalry, to little effect, their attempt to form squire ended in a disordered rout. 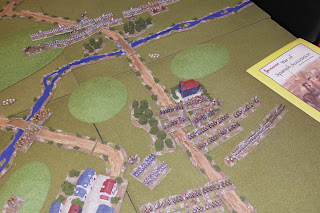 Austrian forces withdrew to the church walls and the centre buckled, leaving the Baden forces the only intact unit in the field. The Austrians in the church held a turn, but finally were overrun. 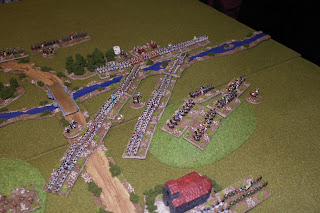 a grand advance of French infantry swept the French cavalry from the hill, taking the flank. 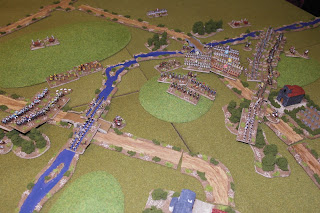 On the last turn the Austrian army was in full rout, however the Baden troops still held one bridge, and so as far as the result went, even with the Austrians routed they still held a bridge, with the French holding the second bridge the game was a draw, with points advantage to the French, however the Austrians admitted effective defeat out of a sense of fair play. (Dam them dice sir, dam them!)
Posted by Mortarion at 15:00