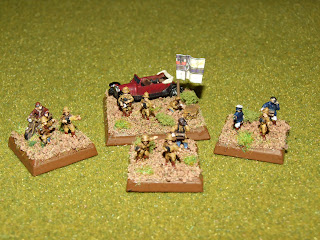 German officers and C in C
Von lettow vorbeck himself (on the larger base) with his staff car he acquired from the British landing forces at Tanga. He ran the car until 1917 when the car ran out of parts. I also have 3 other Commanders Captain Looff of the german light cruiser Koenigsberg, and 2 other sub commanders. 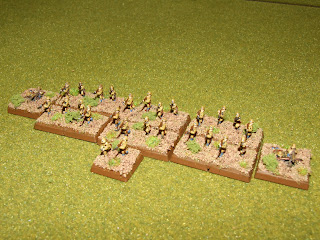 German East African Schutztruppe
Schutztruppe Company, made up of 6 Platoons with 2 HMG, and Captain. German infantry numbered very few in Africa but numbers were boosted by local German settlers in the colonies as well as volunteers and merchant marine crew who found themselves stranded in Africa. Ofcourse they were also boosted by the crew of the Koenigsberg. 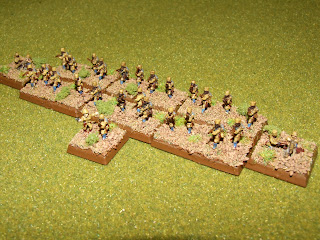 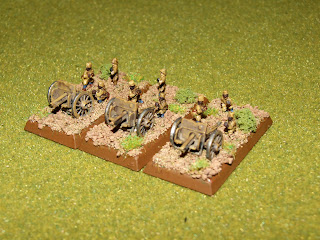 Field Guns
The Germans only had limited guns at the outbreak of war, at Tanga they only had 2 which arrived late in the battle, however the British nicely left all their artillery on the beach when they evacuated Tanga, also the Germans captured Belgian and other British guns as the war went on. Also a German transport ship took several field guns with them to supply German east Africa, so to keep it simple I got some 77mm guns from Pendraken Miniatures and asked Dave to swap the German crew for Askari, I also kept the gun shield as I thought it looked cool! 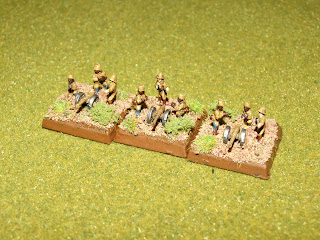 Mountain Gun
The Germans captured mountain guns from the Indians at Tanga and in later battles, these were given to Askari crews who manned then for the war. 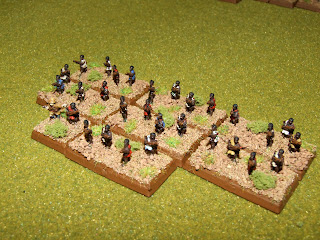 Rugga Rugga
Rugga Rugga, a lose descriptive term for German African tribesmen who volunteered to fight for Von lettow vorbeck. Given that the other colonial powers of Belgium, England and Portugal were not all that popular many tribesmen took up arms with the Germans, They were led by their own officers and armed where possible with modern rifles, but only when enough could be taken from the Entente Powers. 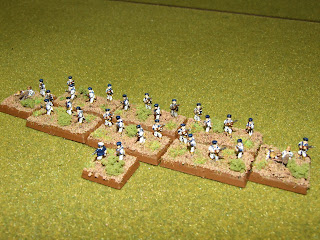 Koenigsberg Crew
The 188 surviving members of the Konigsberg formed a land based force called the Königsberg-Abteilung, They also manned guns and riverine/Lake ships, here I have based a company on a regualr german company, with sailors manning HMG's. 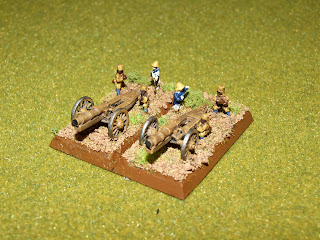 The Koenigsberg Guns
I was going to use another model for these but decided to go for German 150's, I know its not the correct barrel but the overall heavy feel is better than the alternatives. I didn't put the shield on and gave them Askari crew with German marine officers. The Koenigsberg guns proved their worth, been the heaviest artillery in east africa, most survived the war and a few are still around if you search the net for them.
Posted by Mortarion at 23:58 No comments: